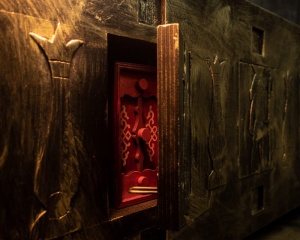 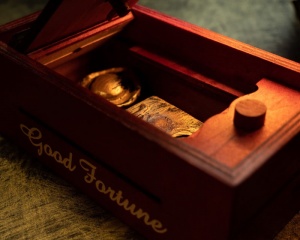 The only one of its kind in Lithuania

The unique puzzle box created by Lost escape differs from other similar ones in that it does not have any locks. All hints are locked with the help of electronic locks. In total, there are 8 tasks hidden in the box, which require all the available senses, logic and intuition to overcome. The developer says he was looking for original solutions and believes that in times when even cafes are smart, the entertainment has to be at the same level.

“We wanted to create entertainment that could come to the customer no matter where he was. The box is suitable for company parties, stays with friends in the sauna, family evenings instead of board games or even children’s birthdays. Thinking about the tasks, I tried to find smart solutions, not to choose the easiest way simply by unlocking the locks.

Pandora took all year to make

It took us more than a month to create the Pandora Box – “We put a lot of work and love into this box, because it took us all year to perfect. And certainly no tasks or puzzles became the biggest challenge. Since the box is fully electronic, a lot of things had to be considered, such as accurately calculating the power requirement of each part to keep the battery long enough. This box is full of all kinds of wires. There is so much inside them that even the hand between them is hard to pass. However, players do not see them because there is only a door outside the task that hides the task.

We never talk about tasks because we don’t want to spoil the fun for those who are going to beat pandora. I can only remind you that the most important thing is not to strain, to enjoy the moment and good company. Often people are looking for mysticism, complex solutions and answers, but the charm always lies in simplicity! That’s why the Pandora Box is designed to make you have fun anywhere with loved ones, colleagues or friends. ”

An original way to deliver a gift

The box is like a portable version of an escape room. Only in this case, it is not necessary to escape the room, but to solve the riddles according to the hints and open the secret compartment of the box, where the victory will hide. And whoever wins, you can choose for yourself. Evaldas, the head of a department of one company, has already used this box to surprise the employees – “This year I wanted to present the annual awards in an unusual, interesting way, unlike always. And hiding them in a puzzle box was a very successful decision! The team didn’t really expect it, but was very pleasantly surprised! ”

Another client also asked to put travel tickets in the winning box – “It was a gift from the children to the parents on the occasion of the wedding anniversary. The box was brought home as entertainment for the evening, and there was a surprise in it. He later told me that my mother even cried out in happiness and surprise! ”

The creator of the idea says that it is a great way to be original – “After completing the game, the elevator lifts the box, and even an engagement ring can be displayed in it. This would be a truly unexpected finding, as tasks require concentration. So any girl would be very surprised and of course happy. ”

Price for the reservation is 50 €